Building vs. Buying a PC

Every once in a while I have someone ask me if they should build a PC or buy one pre-built. I almost always tell them to build it unless they want need an all-inclusive warranty that you can only get from an OEM. If they are ok with having warranties on each individual part, it’s almost always better to build. Not only is it cheaper, but you have greater control of the (quality of) components that go inside.

I recently upgraded my desktop, and I decided to see how much an equivalent workstation from HP would cost (I was going to look at Dell as well, but I couldn’t get one configured similarly).

A note on Video Card choice:

I don’t have a Quadro Video card, however I included that as that was what is available in HP workstation systems. If you don’t need something like AutoCAD certification, you could either save $150+ dollars on a similarly performing Video Card, or spend the same amount on something that would perform far better than the Quadro 2000. For example, in Cinebench 11.5, the Quadro 2000 (Basically a ‘downclocked’ GT450, which is really an ‘entry level’ “gaming” card from Nvidia) scores 45.32 whereas my GTX280OC scores 58.32, and it’s going on 3 years old, but was a ‘high end’ gaming card when I first purchased it (and still holds it’s own quite well, at least for the games I play). You could buy a card that performs similarly to my GTX280OC (basically equal to a GTX285 since it’s the OC edition) such as a GTX560Ti, for around $200 vs the $400 for the Quadro 2000, and for the $400 you would spend on that Quadro, you could get a card that would blow anything I’ve mentioned out of the water, if Graphics performance are important to you.

Now with that being said, these are basically identical systems – one built, one purchased from HP.

Antech EA-750 Power Supply $99.99 (This is just what I have, you may not need this much with a newer, less power-hungry Video Card).

ASRock H77 Pro4 Socket 1155 Motherboard $79.99 (This is my first time choosing an ASRock board. I’ve always gone with Gigabyte. I chose this board because it specifically stated compatibility with the Xeon).

Western Digital Black 1TB 7200RPM HDD $109.99 (I’ve been a fan of the WD Black series since it was first introduced – it’s the only spindle drive I’d consider).

Samsung 22X DVD Burner $16.00 (Nothing special, just a DVD Burner – I already had it, I’d go for the cheapest option w/ good reviews).

PNY Quadro 2000 1GB Workstation Video Card $399.99 (Definitely not what I would choose, but you can read the paragraph above with full explanation).

For the HP System, I configured the “Linux Workstation” so it wouldn’t charge me for an OS license. Here is a screen-grab straight from the HP website: 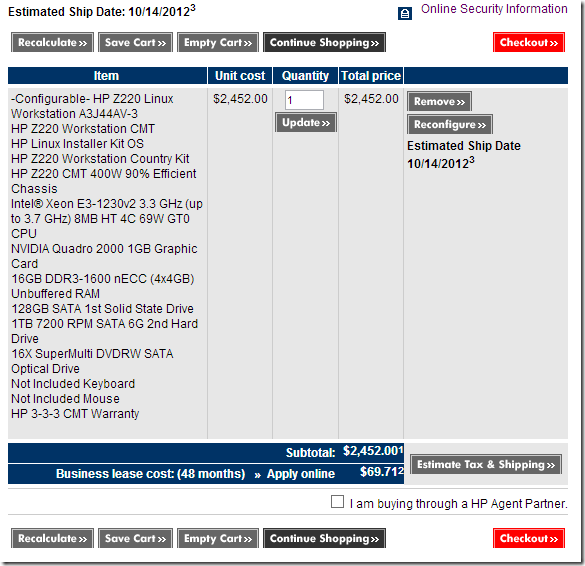 As you can see, you are looking at $2452.00 for a machine with the exact same specifications. Now granted you a.) don’t have to put it together and b.) you get an inclusive warranty and the backing of HP, but $1250 is a huge difference. You could build two of the ‘built systems’ for that, and still have enough left over for a nice dinner out.

Also, you could purchase a consumer grade system from HP, Dell or your local Best Buy, but you wouldn’t get nearly the quality of components and probably wouldn’t have a choice of an SSD OS/Apps drive. Just to see I headed over to Dell’s website, and the only consumer system I could configure with 16GB of RAM and an SSD was an Alienware for $1599, and it wasn’t really comparable since I could only choose one drive (a 256GB SSD) giving a choice of either an SSD or spindle drive.

So there you have it, the choice is yours, but if you are handy with a screwdriver, and don’t need an inclusive system-wide warranty, build your next system, have ultimate control over its components, and save a little cash.