What do you want to accomplish? How I improved my fitness.

Don't be this guy: 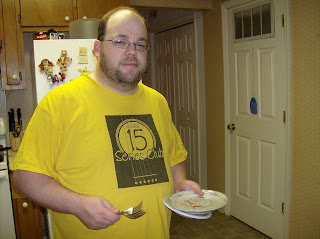 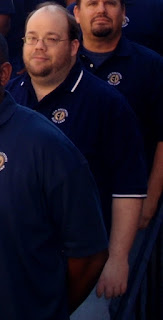 Those are pictures of me in 2009. That seems like a lifetime ago. I love these pictures though, because they remind me of who I once was.

I worked on getting out of shape my whole life. I made eating a competitive sport. At one time I would even brag about how much I could eat in a sitting. I'm ashamed of that now, but I was proud of it then. As a kid people would say things like "He's a growing boy!", "He's so healthy!", "He sure isn't a picky eater!". Sure, I was growing, I sure wasn't a picky eater but I sure wasn't "healthy" either. I was fat. I've always been fat.

At the time of those pictures above, I was carrying 320lbs on my 5'8" frame. I couldn't tie my shoes, I had trouble going to the bathroom. I had severe sleep apnea; I couldn't sleep through the night. I would often fall asleep randomly. There were times I'd wake myself up in my vehicle at stoplights when my foot would slip from the clutch because I fell asleep. I wore 3XL Shirts and 46" waist pants. I couldn't walk to the kitchen to get more food without being winded and having to either sit down or lean onto the counter until I caught my breath. I was perpetually sad. I think the sadder I got about the place I was in, the more I ate.

I'm not sure exactly when, but something clicked one day, and I decided to go for a walk. I walked about 1/8th of a mile and I had to sit down on the bumper of a neighbors car and rest before I could attempt to make it back home. I was so sore the next day I could barely move. But you know what? That day after work, I did it again, and again the day after, and the day after that. I started going to the mall and walking at lunch. Fast forward about 6 months and I was down about 50lbs and I could walk for 3 miles without stopping.

A really good friend at work was always encouraging me to join the gym. I didn't want to go to the gym because I was embarrassed. I envisioned this place full of glistening Athenian bodies all in perfect condition, and I knew I would stick out like a sore thumb. People would laugh at me. I would have to change clothes in the locker room. Someone may even see me without a shirt on! I couldn't bear the horror of it all. I kept saying no.

I was at lunch one day and instead of making my usual trip to the mall to walk laps like I usually did I kept driving and I went to the gym. I walked in, and signed up. I wen't back to work and asked my friend if he was going to the gym that night. He said yes, and I told him I was going with him proudly holding out my shiny new membership card.

That night, after work we went to the gym. I went into one of the private changing rooms (where all the fat people go) to change. We went upstairs, and I tried everything my friend asked me to try. I was able to bench press an empty bar, but that was about it. I could curl a 15lb dumbbell (if I used my body motion as momentum). He even talked me into trying to do a dip (I didn't think I was going to get down once I got up on the dip station). Looking back, I really didn't do anything substantial that first night at the gym, but I could barely move when I woke up the next day.

There was this one special elliptical machine there. I'm not sure why I liked it other than it was a little out of the way. It was on the back row so nobody would be behind it, but it became my best friend. I would spend an hour on it at a time, each time turning the resistance level up a notch. I kept dong that elliptical until one day I decided I wanted to try and run. I got on the treadmill, and I couldn't do it. I felt like I was going to fall off, so I started running outside. I ran for 1 minute and I felt as though my chest would explode. How could this be? I spent so much time on the elliptical I should be able to do this. I told myself I could do it, and before long I was able to run a mile.

It wasn't too long after that I "ran" my first 5K race. That was in May of 2011. I ran it in just over 33 minutes. I was proud, but I didn't really stick to running. I went back to the connivence and ease of my favorite elliptical machine. I kept losing weight, and I kept lifting weight and getting stronger. During this time, a new "Wellness Committee" was formed at work and I was a member. We were planning to host a company 5K race at a local trail. I was so worried. Everyone was so proud of me, and knew I'd run a 5K before, but in my mind I wasn't sure if I could do it again. So, I started running again. I ran every day. Sadly I lost focus on the weights, and put all my focus into running. The weekend before the company 5K, I ran another 5K that a few of the ladies from work were doing as well. I finished in just over 26 minutes this time, and actually ran the whole way. I was proud of my accomplishment, but what really hooked me was when during the awards handout they called my name. My name. I had won something! You could've knocked me over. I won 3rd place in my age group and got a medal. I felt like I had won the Olympic 5000 meter. I ran the company 5K the next weekend. This was in September of 2011.

One day, the next month, in October I had been working on building up my distance. I had gotten to where I could run a 10K (6.2 mile) distance pretty easily and I decided to keep running. I ended up running over 10 miles that day. When I got home, I tweeted my accomplishment and a co-worker congratulated me and asked me if I was training for a half [marathon]. I wasn't training for a half, but was planning to run the 10K race in an event that had a Half-Marathon as well. So, on the spur of the moment, I signed up for the Half instead of the 10K. The race was under a month away at this time, and I had a week-long trip to Denver two weeks before the race.

I did that Half-Marathon in 1 hour and 50 minutes. I did a few more 5K's, a 10K and a 12K after that. It wasn't too long before I had my first runner's injury. My knee was killing me. I'd overdone it. I didn't run for almost 2 months. What I did do was focus on the weights. I got all of my lifts up, and I was really getting stronger. What also happened is I started gaining weight again. Although I wasn't getting fat, it wasn't all muscle either. My knee was better, and I started running again, while still lifting. Before long the running bug took over and I was running every day again. In August of this year, I ran 128 miles. In September I ran 150 miles. I was getting a little burned out, and in October I cut back a little and ran just under 90. The (same) Half-Marathon was coming up in November, so I started training for distance. I did a 15 mile run during this period for the first time. The Half-Marathon came, and I beat last years time by 2 minutes, finishing in 1 hour and 48 minutes. I'd also cut my weight back down. Way down. It started getting dark after work, so I started going back to the gym. I don't like the treadmill, and the elliptical is boring now, unless I'm doing HIIT cardio or something. I started lifting again.

I've been taking lifting more seriously now than I ever did. I'm eating the right foods, I'm taking the right supplements. I'm hanging onto every word and piece of advice that [NASCAR legend] Mark Martin puts on Twitter. That man is my ultimate hero. He is 53 years old, 6% body fat and has a commitment to fitness and getting stronger that is unequaled. I've been doing lots of research on the proper way to do lifts, the proper nutrition and the proper supplements to take. Right now, I'm sitting at about 15% body fat according to my (cheap) body fat scales. My goal is to hit single digits. I'm certain I'll do it.

I'm not one for taking a lot of pictures, so I don't have any super recent ones, but since I showed some before, I put some other more recent pictures here as well. 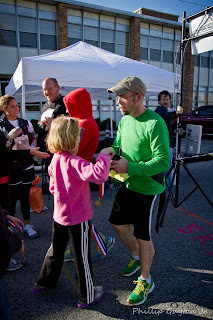 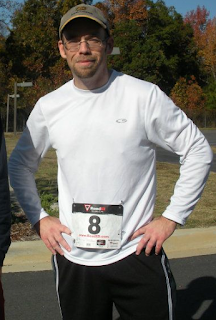 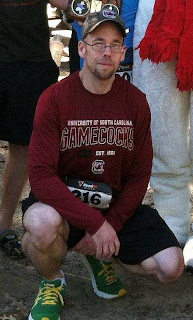 I've never been one to tell myself "No" or "You can't do that". Losing weight has changed my life in a lot of ways. It has taught me that I can do anything I want to do, and there is nobody to stop me but myself.

At work, I've been an "IT guy" for many years, but I had a closet desire to be a programmer. Over the past year I spent every night, and every minute of free time I had to teach myself to be a programmer. I was able to make that transition at work back in October. In two and a half months I've doubled my knowledge already, and I'm learning even more each day. No matter what your goals in life are, there is nobody stopping you but you. If you don't like your body, change it. If you don't like your job (or, like me think you'd just like another job better), do something about it. You can't simply will a change to happen. You have to act upon it.

So, whatever your goals are for 2013, get out there and start working on them. Now! There is no time to waste. Remember you can do it. You just have to try.

I'm not going to publish my e-mail here in the text of this post, but you can find me on Twitter, Google Plus, Facebook or the comments section here on this blog. Please, if you need someone to talk with, let me know. I don't claim to be a fitness expert, or anything, but I believe in each and every one of you reading this. If you have a desire to make it happen, are willing to put in some work, you can make it happen. I know you can.
Posted by Jayson Rowe at 7:51 PM

Email ThisBlogThis!Share to TwitterShare to FacebookShare to Pinterest
Labels: Fitness