Inspired by Sam Saffron via his awesome blogpost that details his development setup, I decided to finally move my home desktop back to Win8 (soon to be 8.1).

Yes, I still have Linux on my Laptop, and I always will. However, like Daniel Robbins I'm finding that booting my desktop to a Linux distro (*any* Linux distro) sends me into a tailspin of seeking perfection, chasing the latest, greatest thing and it has gotten to the point of lost productivity. I only have a limited amount of time in the evenings/weekends to do "fun" stuff at home, and that "fun" stuff isn't tinkering with my OS any more. I need a stable environment to run the few games I like to play, and do some .NET dev, and be able to spin up Linux VM's for other types of development I may not want to do on Windows (Python, Ruby, GoLang, etc).

It also gives me the freedom to explore new things in my Linux configs. I've created a few "templates" in Virtual Box of distros I like to use, and I can spin up clean VMs from those at will. Also, having my laptop handy (and connected via Synergy) helps as well. Maybe it'll get more use now. I do need to upgrade the spinny drive to a cheap SSD though - the rest of the machine's specs are pretty decent, it just lacks in storage responsiveness.

One of the things I really took away from Sam's setup was his use of a VM in conjunction with X forwarding over SSH. I took a little different method than he did by using MobaXterm but I really like the results so far. Right now I'm just trying a Debian VM running Xfce and I really haven't done much with it just yet, but I will likely do an Ubuntu VM soon so that I can add the Sublime Text PPA and set up a RoR dev environment.

I will detail my setup in a little more detail soon, but for now, a preliminary screenshot of Mousepad running via my Debian VM.

Thanks for the inspiration Sam, I needed a personal computing reboot. 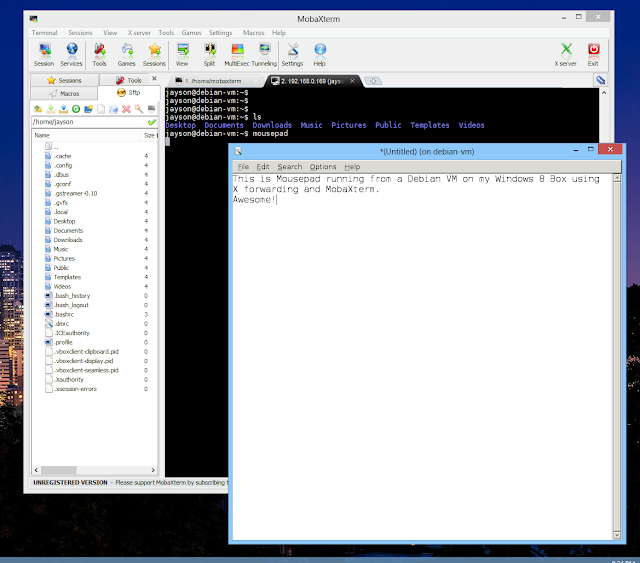